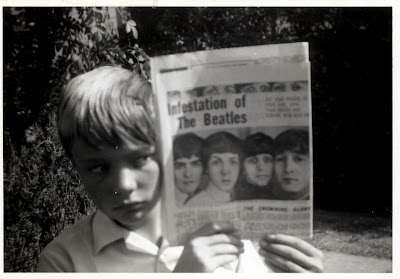 When I was in my early to mid teens it wasn’t hard for my parents to choose my birthday and Christmas presents. The Beatles in those years brought out two albums a year in synchronicity, more or less, with these two occasions. All of the Beatles albums I owned, up to and including Sgt Pepper’s Lonely Hearts Club Band, were in mono. I didn’t realise it at the time (I owned a small portable record player and mono was what it did) but the Beatles themselves only paid attention to the mono pressings, leaving the stereo mixes to the EMI boffins in their white lab coats. I sold my albums in the late 1980s, replacing them with CDs which were, of course, stereo mixes. Not that I listened to these all that much. Partly this was because when the music originally appeared I had listened to it with the attention only someone of that age can bring to things. I knew every note of every song and if I had the vocal cords of a Petra Haden I could probably have duplicated a lot of the musical parts. Partly also, as I now realise, the sound on these CDs simply lacked the immediacy of the old mono (and later stereo) albums. So I investigated the new Apple pressings of the works and, to my surprise, I found myself listening with the excitement I had originally felt for much of this work. The sound now jumps out of the speakers (or the cans) as it once did and the stereo mixing has been done with care. I can hear small parts in some of the songs that I swear I had never heard before. The only problem is that the mono/stereo choice has already been made for all but the most fanatical (and salaried) discophiles. The mono mixes will only be available as a complete set, the lame excuse for this being that too many different versions of the disks would cause confusion and clutter in the stores. This just doesn’t wash with me. The band and the record company have made a lot of money out of us punters over the years. The simple answer to the problem is one that has been used before for other sixties bands: put both mono and stereo mixes on the one disk (and sacrifice the DVD moments).

I’m interested too in the shift of critical consensus over the relative worth of these albums. In the wake of progressive rock, Sgt Pepper was long thought of as the Beatles’ ‘masterpiece’ but from the late seventies on (roughly speaking) Revolver became the more highly regarded album. In the 2000s I sense that the honour has passed to the ‘White Album’, though there’s always a few who’ll differ with this (like Billy Childish, a true maverick, who figures it was downhill all the way after the unofficial recordings from the Star Club). What had once seemed a weakness (the overly eclectic nature of the material) now, in the MP3 era, seems a virtue. Two of the best critical pieces on these disks are from Ian MacDonald (author of the wonderful Revolution in the Head) and Charles Shaar Murray. MacDonald’s book goes into detail about all of the Beatles official recordings and while there’s much to differ with I tend to find his comments mostly on the money. He notes that the ‘White Album’ was originally to have been entitled 'A Doll’s House' but that the Leicester band, Family, brought out their first album with a close enough title for the Fabs to have to change tack. MacDonald ruminates on what a possible cover illustration together with the slightly seedy, crepuscular feel of the work within might have done for the album. While he doesn’t consider it their best work by a long shot he details the long studio session when the track order was worked out and calls the album ‘a masterpiece of sequencing’. Murray noticed astutely that while the people he spoke to were almost all in agreement that the album would have been better as one record rather than two it was hard for them to reach any agreement about which tracks were to be retained.

A personal footnote: When I was at Monash University in the late 1960s the Labor Club, while preferring the official music of various Marxist regimes alongside the work of tedious ‘folk’ artists, begrudgingly countenanced some current rock and pop, presumably to lure in those youngsters like myself who knew no better. In 1968 however, a ban was placed on all Beatles records not long after ‘Revolution’ hit the airwaves.

'Rubber Soul' and 'Revolver' became regarded as the great Beatles albums, the pinnacle, due largely to Greil Marcus (I think it was) in The Rolling Stone History of Rock & Roll (1975). This view of their work was still being repeated as authoritative as recently as last year (2011) by Robert Forster in The Monthly. But why should this be the case? By then they had perfected their composition and the simply played the variations right through 'The White Album' and beyond. In my view they never made a bad record, one you flip past in an op shop bin, and the drugs were incidental, in a way. The other day I watched one Ed Sullivan show on YouTube and John was singing the opposite grammatical line to George and Paul, i.e. instead of "I love you' it was 'You love me' &c. One blogger actually believed that John had forgotten the words, when it's obvious he was deliberately singing contrary. When you listen to Beatlemania 1963-65 this is going on all the time, weird time signatures, deliberate bung notes, new words, and all at top speed. To me, that is why they're awesome. They knew how to do it already, so now it's Reinvention Time.