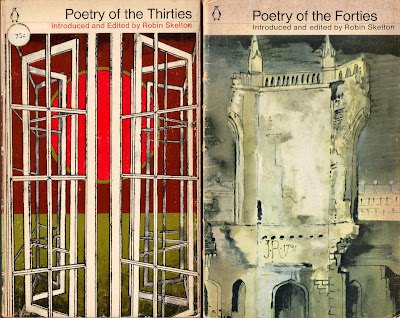 Sometime during my last year of high school (1967) I bought Robin Skelton’s Penguin anthology Poetry of the Thirties. It was the first poetry book that I obtained entirely of my own volition and I approached it openly. I knew a lot more about modern British history than I did about the poetry though I would have seen work by Auden and Spender in school anthologies. Partly I was attracted by the shape of the collection. The sections within it promised a kind of argument. The poems were of varying quality though they took their place in the historical structure. And there were kinds of poems I’d not encountered before: pieces of socialist verse, the poem as journal (Louis MacNeice) and surrealist work (I had only seen some later and more ‘romantic’ poems by Dylan Thomas). The two most important things for me at the time were some of the surrealist pieces (Hugh Sykes Davies in particular) and the sections of MacNeice’s ‘Autumn Journal’. I had discovered the poems of ‘Ern Malley’ around the same time and the anthology contextualised this imagined author’s work for me. I was bowled over by the possibilities for poems that would be something other than reflections of my adolescent psyche. Some years later I picked up Skelton’s forties anthology, and the work in this added to my, by then, greatly expanded experience of possible poetries. It’s hard to imagine Penguin publishing collections like these today. The history of British poetry has been overwritten by the Movement writers and their tepid descendants who still dominate the official scene. Indeed it seems a lost moment when, as Gael Turnbull (or Roy Fisher?) said, Philip Larkin almost appeared in Cid Corman’s Origin magazine (he withdrew the work himself when discovering he wouldn’t be sharing space with his own kind of people).
Posted by Laurie Duggan at 17:23

My parents had several books from the 'Penguin Modern Poets' series, also published in the 1960s, which I read as a teenager in the 1980s. They were great; three poets to a book, roughly but not entirely like-minded, and a decent sampling of each poet's work. It's a format I'd like to see brought back. (Age 15, my favourite was of course the Corso/Ferlinghetti/Ginsberg volume.)

I had, still have I think, that Thirties book. I love the idea, and the cover!

Pedants Corner: If the truth be told the Thirties book shown here isn't my original copy (an earlier edition which used the same image but had its title in a box). The one shown is a replacement from the early 70s.