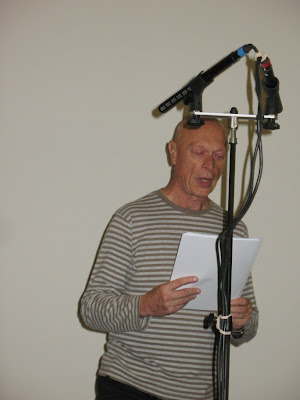 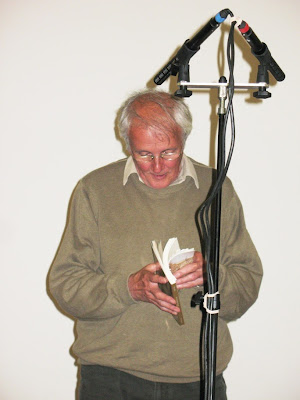 Last night’s reading at the Swedenborg Hall demonstrated two distinct styles of presentation. Adrian Clarke rocked back and forward as many of the poets I’ve seen who have had connections with Bob Cobbing’s Writers Forum tend to do. Peter Riley stood still. You could characterise this as a ‘Cambridge’ position though I don’t think Peter would be altogether happy with that. It did mean that he was easier to photograph. My camera suffers from a slight delay when using the flash and Adrian almost always managed to duck behind Colin Still's recording mikes at the wrong time.
It was the first Shearsman post-summer reading and a fine one. Adrian Clarke read from Eurochants: dense, fast-moving poems with many voices. Peter Riley read from The Derbyshire Poems, a book that brings together three collections from the seventies and early eighties together with two essays written in the same period as glosses more or less. I’ve had Lines on the Liver (Ferry Press) and Tracks and Mineshafts (Grosseteste) since 1985 when I picked them up at Melbourne’s Collected Works bookshop. The other materials would have been harder to come by but now we have the whole sequence available.
Posted by Laurie Duggan at 13:33