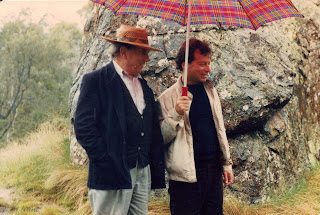 At Monash University in the late 1960s Peter Craven first showed me Christopher Logue’s earlier Iliad translations that would later be collected with others as War Music. I picked these up as I would copies of some of his other books the ABC, New Numbers, Ode to the Dodo. All of these works were clearly oriented towards performance, though Logue was not a ‘performance poet’ in the sense in which the term subsequently began to be used. He was certainly a performer of poems, participating with Allen Ginsberg and others in the famous Royal Albert Hall reading in 1965. I saw him perform a portion of his Homer in Melbourne with the actor John Stanton when he visited Australia in 1986. This was at the first Melbourne Spoleto Festival late in the year at which August Kleinzahler also appeared (a more than happy substitute for an ill John Ashbery). One request Logue made to his Melbourne hosts was for a visit to Hanging Rock where the action of Joan Lindsay’s story (Picnic at Hanging Rock) and Peter Weir’s 1975 film version took place. It was a dingy and wet day with no sign of cicadas and none of our party were mysteriously abducted. I took some photographs near the summit. Here is one of Logue and Kleinzahler.
I subsequently visited Logue in London on two occasions as noted in journals:
7th May 1987, London
Catch a cab across to Camberwell to Christopher’s new house. The builders are still working on it. We go down to Elephant & Castle to a pizzeria for lunch. On the way C asks me to summarize Europe. In the restaurant we talk art – the Velazquez and Goya works in the Prado – and poetry –if only Pound had been as good an editor with the Cantos as he was with The Waste Land – or if only Eliot had edited the Cantos; Bunting (neither of us up on ‘Briggflatts’ – it seems, like Zukofsky, too condensed, too much music and not enough speech);  George Steiner - a fraud.
13th September 1992, London
Crossing Waterloo Bridge we see Logue’s name in flashing lights over the National theatre. Get off at Camberwell Green but have trouble relating my sketch map to the geography. Realize I haven’t brought Logue’s phone number to check up. I haven’t got his street number either. We decide to ask in a pub for a telephone directory. The first pub we enter has one from A-K. The second pub claims not to have a telephone directory. We find the street and work out which house it is – near the middle, set back a bit, door on r.h.s., a church spire just behind – getting it right first time (I’d seen the place five years back when Logue had just moved in). Logue asks after various people and says he’s hoping to get to the 1994 Adelaide Festival & perhaps tour round with ‘Kings’. He’s at work on further Homer at the moment.
Posted by Laurie Duggan at 11:01