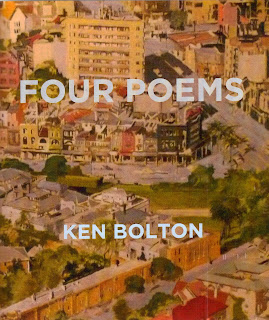 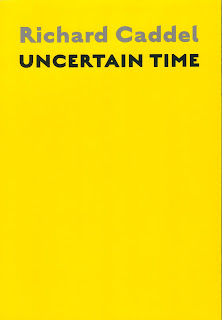 Ken Bolton’s first book, Four Poems, has just been reissued by Little Esther. When it first appeared with Sea Cruise Books in 1977 it was A4 sized with a hand coloured cover. Right from the beginning Ken wasn’t about to ‘compete’ with the Sons of Rimbaud who were mostly aiming at tomes that seemed more impressive as both physical objects and intellectual exercises.  It is unusually coherent for a first volume as the re-release shows us well, but at the time it mightn’t have disturbed the macho contingent gathered around New Poetry all that much, even as they grasped themselves at the livre composée. The title refers to Ashbery’s Three Poems though the work itself sees Ashbery through the eyes of the second generation New Yorkers. There’s a process, an argument, going on here however that we now recognise as Bolton’s alone.
Pressed Wafer has reissued Ric Caddel’s 1990 volume Uncertain Time. Here is English work that ought to be of interest to the American audience. Caddel had visited the States in the 80s, reading in Cambridge and travelling on to Blackhawk Island in Wisconsin to see Lorine Niedecker’s cottage. You can see the attraction her poems would have held for him in the work collected here. Aaron Tieger’s superb introduction will situate the poet for those new to his work. The poems are spare and musical with a fine wit. I had the pleasure of meeting Ric at home in Durham in 1992. He drove me to the Roman Wall and gave me copies of many of his own Pig Press productions. A collected edition of his work would be a very welcome event.
Posted by Laurie Duggan at 12:07