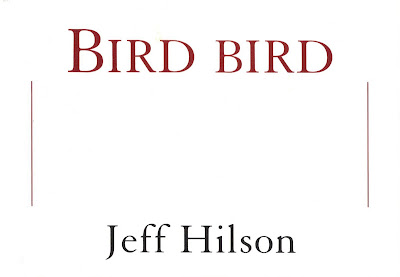 The swift is a bird seen in Britain usually between May and August. It’s a long-distance flyer and a highly acrobatic one. But at this point I’d better let Jeff Hilson, no mean acrobat himself, take over:

Easily told around the houses and they went this way looking like quick
and brown, the same as before only going. Going to a roding valley there
to feel for the wrong bee. A fish carried forward in the hand, to soothe.
There in time to motley. The head to lead the circle. They fell down
rhyming, lightly come, like a man at things in a wood. A poetry ring
recent and wet. The point is outside and in, though scarcely so. Like
scarcely weeping, or scarcely so. From town to form, from place to
position. Or grazing on each other they work the suburb to a thin.

This is one of the 41 poems in Bird Bird, a book I can’t recommend too highly. Landfill Press in Norwich brought it out a month or so back but though they have a site I’m told they are just about to amalgamate with another press. It would be a great pity if this wonderful book were to be lost in the shuffle. Hilson quotes Philip Whalen: ‘I’ll ignore those preposterous feathers’ But if I were you I wouldn’t ignore this book.