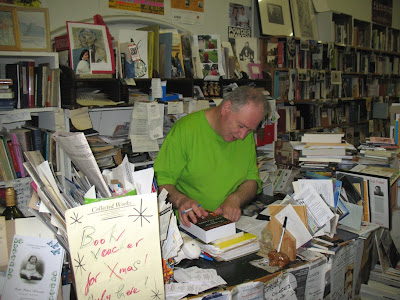 I’d heard that Melbourne’s Collected Works bookshop was in trouble but I’m more than happy to report that this invaluable resource will continue to operate for the foreseeable future. When I visited the shop in the week after Christmas Kris Hemensley (above) explained that the rumours had related to the fact that the property owners were about to raise the rent for the next four-year lease. There had been moments of hesitation but Collected Works decided to host a benefit and to go ahead with the new lease. The benefit and subsequent patronage ensured that the shop will continue to be viable. It is a remarkable institution. Initially it was run by volunteers though the imposition of commercial taxes (despite the non-profit nature of the business) meant that it made no sense for the staff not to get at least nominal wages. Profits continue to be translated into new stock. To say that it’s the best poetry bookshop in Australia isn’t saying much these days. It is possibly one of the three or four best poetry bookshops in the Anglophone world. Since it doesn’t function on the usual sale-or-return basis that most bookshops do the books on the shelves are not periodically removed. This means, for example, that on my recent visit I was able to pick up a copy of Melbourne poet Garrie Hutchinson’s second (and final) book of poems, Terror Australis, published in 1975 by the long defunct Outback Press. Collected Works is well enough known (through the grapevine mostly: it doesn’t widely advertise) for overseas visitors to divert there, even when time is precious. Retta Hemensley told me on one occasion that Thurston Moore from Sonic Youth had come in while the band was on tour and bought a swag of hard to get works relating to the Beat Generation. Long may this marvellous place flourish.
[Kris Hemensley, by the way, posted a kind response to my piece on the University of Kent’s Charles Olson conference]
Posted by Laurie Duggan at 10:15

Well put; I feel bad that I had to be reminded about that great bookshop by someone living in England! Sometimes we take things for granted.

Hi laurie! My friend Alan Pose told me you'd posted abt the Shop & included my photo! (Eeek! as i really wearing a t-shirt with that shade of green?) Btw, Thurston Moore was collecting New York chapbooks & pamphlets, scored big time! Nice to hear from Warwick too, and see the group shot of Gig, Sam, Tim & co...
Best wishes there in what my brother bernard calls "very cold"!midingen