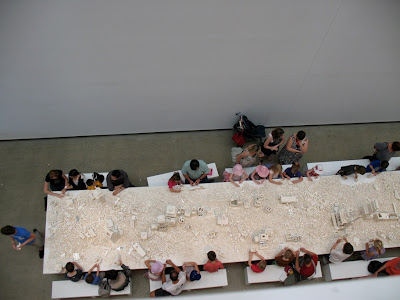 When we left Brisbane in 2006 the new gallery (GOMA) was still under construction. Now it exists, a short walk from its parent, the Queensland Art Gallery, past the refurbished State Library. GOMA is a welcome space though it partakes of the gigantism common to many galleries designed for contemporary art. I remember one of the members of The Dictators saying on the cover of one of their albums ‘Quantity is quality!’ The huge internal spaces are correspondingly designed for installations or large sculptural works and anything as small as a conventional painting or photograph tends to be lost in all of this. I noticed two major strands of contemporary work that are common to such spaces. One, the pseudo-religious, often makes use of darkened rooms with illuminations and churchy piped music. The other is what I’d call ‘kidult’ art and it can take various forms. It can resemble children’s toys, though the scale is often gigantic (this is the sub-Jeff Koons approach), or it can invite participation, like a giant slippery slide or an immense Leggo set (as shown above). Significantly the majority of people in GOMA on the couple of days I was there seemed to be under ten. I suppose at least the arrival of GOMA has meant that the QAG is able to show more work from the stacks. One favourite of mine has reappeared after a few years of storage or loan. It is Vuillard’s 1905 interior ‘Le Salon des Hessel’. It is a large painting, about a metre and a half by two and a half. It would still be lost in GOMA. Both of these Galleries, it should be noted, are perilously close to the edge of the Brisbane River.
Posted by Laurie Duggan at 16:32