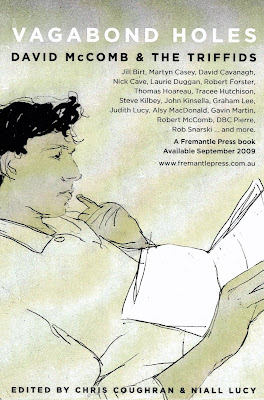 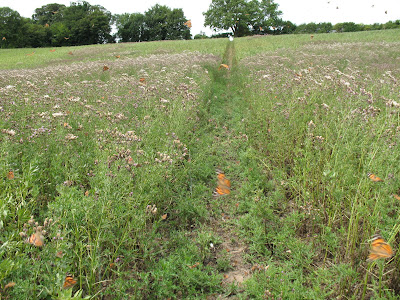 Posted by Laurie Duggan at 11:08 No comments: 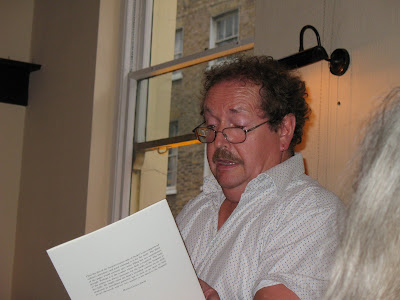 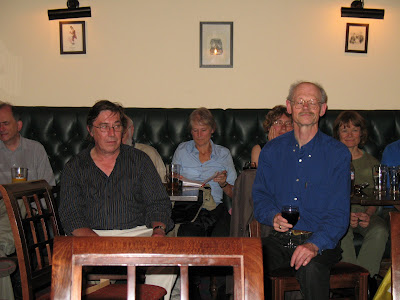 I’ve noted before now the delightful custom around here to produce books celebrating particular poets. Last night at the Blue Bus reading David Annwn (top) presented Alan Halsey and Gavin Selerie (above) with Salamanders & Mandrake, a publication roughly coinciding with their 60th birthdays. A cast of thousands (well, 29 – 30 counting the additional piece by Johan de Wit included in an attached envelope) contributed to the volume. And despite the near tragedy of a double booking at The Lamb, all was well. 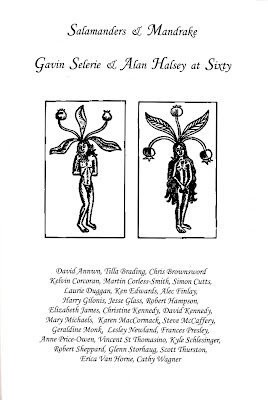 Posted by Laurie Duggan at 14:31 No comments: 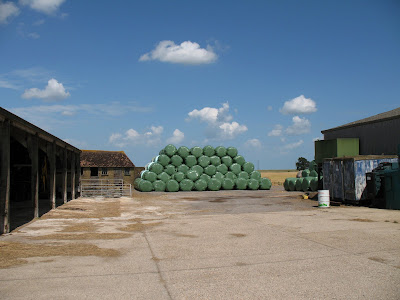 Posted by Laurie Duggan at 17:12 No comments: 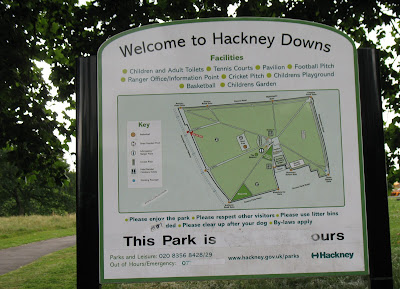 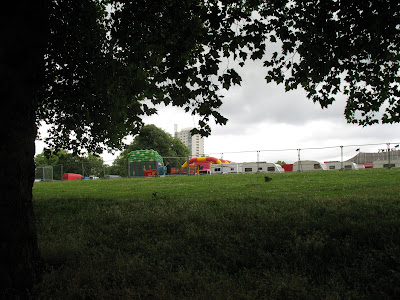 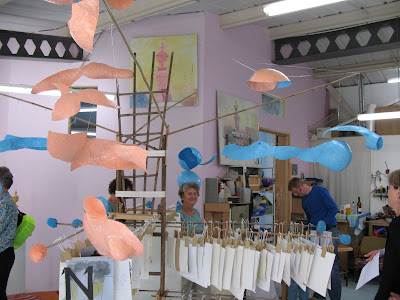 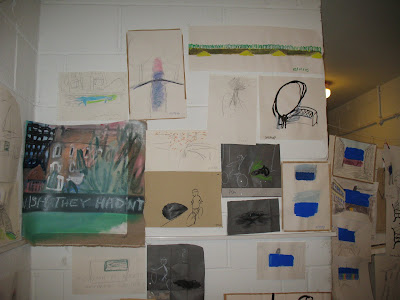 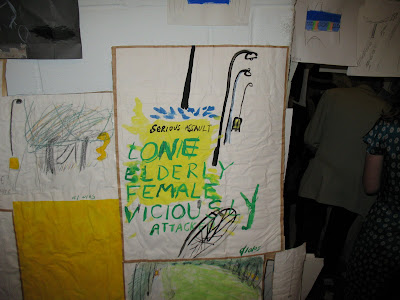 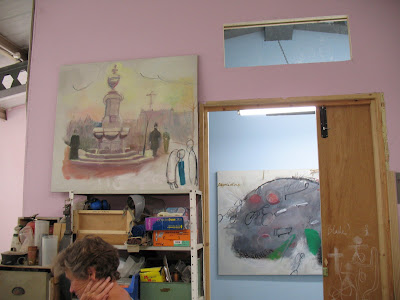 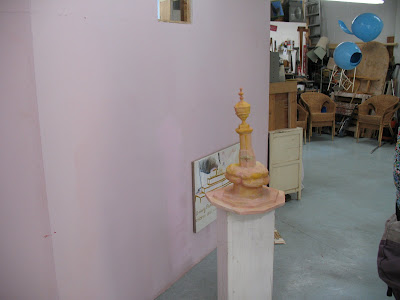 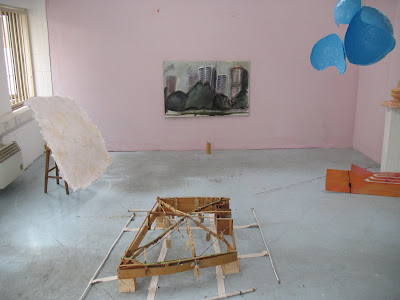 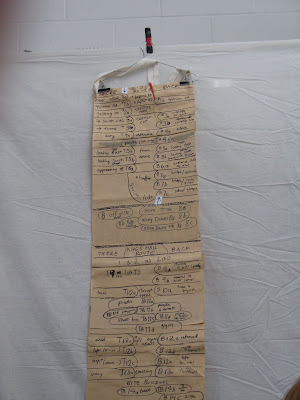 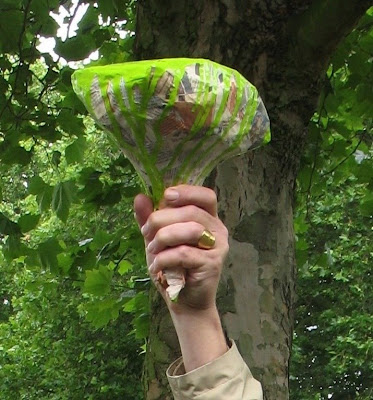 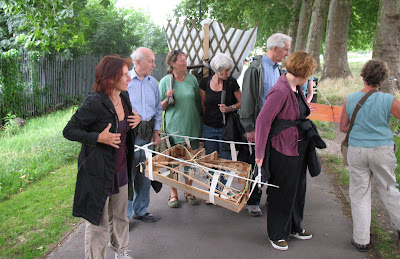 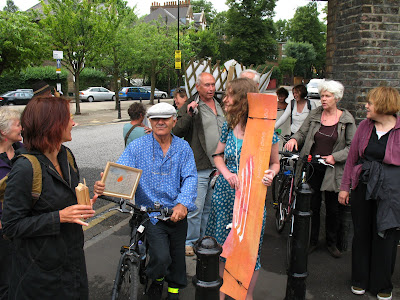 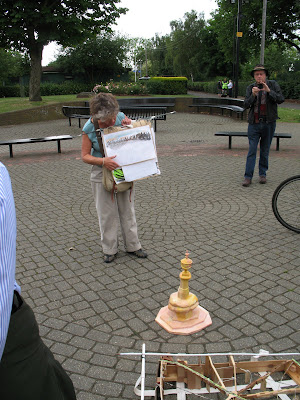 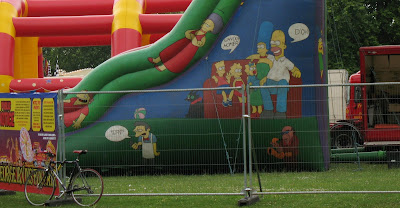 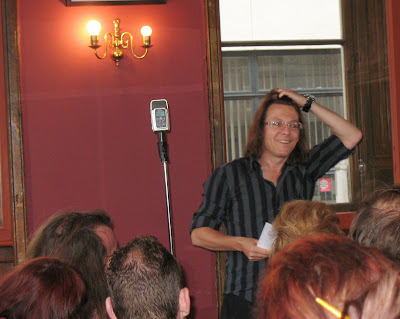 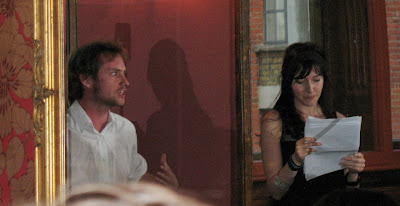 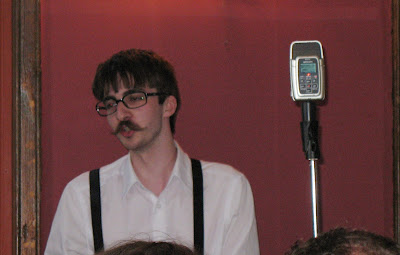 This month, Crossing the Line held their reading off for a week due to a competing event. Instead it happened last night at the usual venue and celebrated the launch of the latest issue of onedit. I only caught the first half of the evening featuring oneditor Tim Atkins (top, with lightbulbs going on), Jennifer Cooke, Emily Critchley (seen in mirror image with co-reader Jow Lindsay), and Harry Godwin (bottom). A great turnout for one of the better online mags. On the table were some new booklets from The Arthur Shilling Press - additional proof, if it were needed, that poetry is alive and well.
Posted by Laurie Duggan at 11:28 No comments:

I’ve noticed that a number of blogs lately have been agonising about newness: what is new, what do we call it etcetera. We wallow these days in job descriptions like ‘post avant’ that indicate not much more than the fact that various writers of the past are now unavailable (if they haven’t been appropriated to death). Those who invent the labels often enough seem to be suggesting that all that came before themselves is fit for the dustbin of history. In an environment like this younger writers naturally feel that they should mark out spaces for themselves. Every few years there’s a new take on ‘realism’, which is fair enough I suppose because realism is always already the impossible project. The ‘dirty realism’ of the 1980s has now mingled its dust with flarf, becoming a new ‘edgy’-ness (a bit like the laughable pop term ‘emo’). It is understandable now that writing schools are churning out poets of all descriptions that this concern with branding should be with us. If I were a younger writer I might want to avail myself of some of it. But I think that soon enough I would be running for the hills. Only the originators of these house styles ever really want to hang onto their designer labels, and they often enough become embarrassments in their dotage.
Posted by Laurie Duggan at 10:35 2 comments: 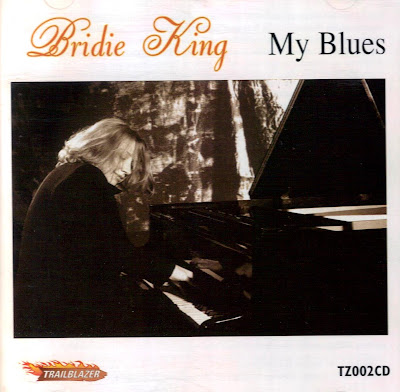 At the beginning of the 1980s I was living in Sydney and very much into the pub band scene. At the Forest Lodge pub in Glebe the Magnetics would play. They were, for the most part, a three piece apart for the period when the guitarist from Dragon joined them. The audience’s response to this addition tended to echo the gestures of the teenage audience of the popular ABC TV show Countdown, on which Dragon (a NZ band) appeared. We would wave our hands above our heads (the Magnetics themselves would never appear on Countdown). Elsewhere, in places like the Rose of Australia in Erskineville, or various other inner city pubs in Surry Hills, Rozelle and Newtown, the R & B (in the old sense) Ratbags of Rhythm might appear, or the Bopcats (a band focussing mostly on rockabilly). I loved all of them, but the ones I loved the most were the soul bands. At various pubs in the inner suburbs one could see the Dynamic Hepnotics (whose singer Robert Seuss was one of the only people I can think of in that music scene to wear a cummerbund. He was a great singer, no doubt still is, and the band was as funky as it’s possible to get). My favourite band of them all though was the Champions, an impossibly tight soul group who never really made it onto record. The Hepnotics produced (as far as I know) one live and one studio LP (the live one didn’t really capture their style; the studio one was ok). The Champions only recorded an EP which didn’t in any way reflect the power of the band. You just had to have been there at the time. I was secretly in love with Sally King, the Champions’ singer, though I don’t think I ever spoke to her (the band did, however, play in their sets a couple of tracks that I’d passed on to them via cassette – ‘Soulful Dress’ was one of these). Most of these bands are mentioned in my long poem Memorials, published by Little Esther (appropriately enough) in 1996. I had a line therein about the impossibility of not dancing while the Champions in particular were playing. It was a bit clumsy till John Forbes, looking over the manuscript, gave me the right phrase: that these bands ‘made dancing your condition’. Some years later I came across a worthy aural survivor: a CD of Bridie King’s band. She was the younger sister of Sally King and a wonderful pianist, and on this album, My Blues, dating from 1999, a handful of great singers appear (including her sister Sally).
Posted by Laurie Duggan at 21:05 1 comment: