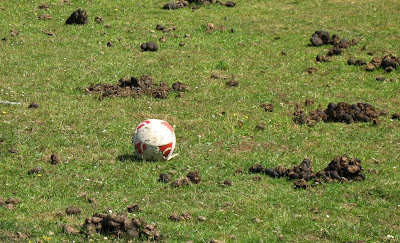 Posted by Laurie Duggan at 18:26 No comments: 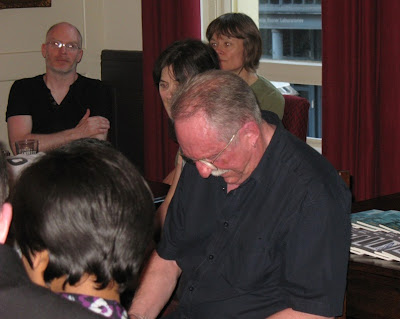 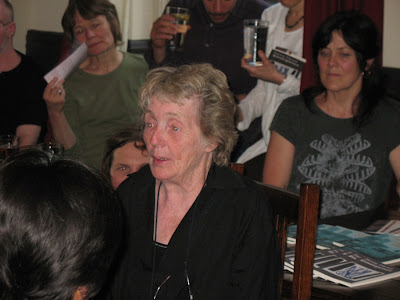 The tube was stifling last night in London, but it was nowhere near as hot as the upstairs room at The Lamb. Blue Bus reading #39 (I think) featured Tom Raworth and Fanny Howe. You can't tell from these photos but a room only a bit bigger than my own living room held (or failed to) some eighty people. They were there for good reason. It's always a pleasure to hear Tom Raworth read but this time he began by reading three poems from Jim Goar's terrific new Reality Street book Seoul Bus Poems before launching into his own work. Fanny Howe read from her new Reality Street book Emergence, a collection of early work. I didn't venture downstairs during the break for fear I wouldn't be able to get in again. I wouldn't have missed these poets for the world.
Posted by Laurie Duggan at 15:46 No comments: 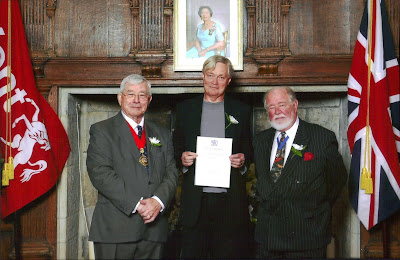 Over the years I’ve grown to distrust reductive art practices. In the visual arts these usually take the form I’ve often thought of as ‘one idea art’ (not to be confused with minimalism). This is an art which seems to rely on a simple conceptual base capable of infinite extension. The distinction can be a subtle one. Jeff Koons is, I think, a ‘one-idea’ artist whereas Claes Oldenberg isn’t (even if so much of his work involves the gigantic reproduction of common objects). In poetry ‘one idea art’ is often the product of a desire to remove one’s work from the perceived social conditioning of language. Chance procedures are one way of doing this. But even Jackson MacLow seemed to realise that chance alone is not enough; that social conditioning is already inscribed in the modes we use to disrupt our practices. The problem with reliance on artificial methodologies (and the problem with ‘one idea’ art is that it primarily consists of a set of concepts which is then (often painstakingly) realized (why not just print the idea or a set of instructions?). Chance can and does certainly play its part in a lot of great works but to turn it into a method, the only method, is to make it into something else, an already conditioned state that the operation was supposed to remove us from. There are some important differences in the way this practice occurs across the arts. In visual work it tends to play into the hands of curators and rapidly becomes a tic or ‘signature’. With poetry I suspect it has as much to do with a certain kind of puritanism, and here the post-avant shares some elements with the neo-conservative. I keep thinking of Frank O’Hara’s comment that so much American writing had the feel about it of a ‘good design’ show ‘where everyone becomes friends at the wake of Art’. Of course it is often argued that without a methodology the writer/artist simply falls into an accustomed style and an unquestioning relationship with language. But isn’t this going to happen with all bad art? Constant vigilance I’d say, is the only way out. Unfortunately or otherwise it’s not (as I've suggested in an earlier post) a teaching method.
Posted by Laurie Duggan at 10:20 3 comments:

Happy birthday (yesterday) to Roy Fisher (his eightieth). For which occasion the above Shearsman volume appears. Peter Robinson has done a fine job of editing a collection of unpublished work by Roy together with essays, memoirs and poems by a goodly number of authors (myself included). I won’t single anything out here since the whole thing reads well. It’s not an obligatory nod, more a set of joyful responses. At the back of the book there's a photo of Roy playing the piano, courtesy the archives of Notre Dame University where it was initially captioned: 'John Cage played one piece that consisted of four and a half minutes of silence in his 1980 performance of avant garde music'. This item must be of some amusement to a man who thought he had fallen silent around the time when he published his Fulcrum Collected Poems in 1969.
Posted by Laurie Duggan at 18:00 No comments: 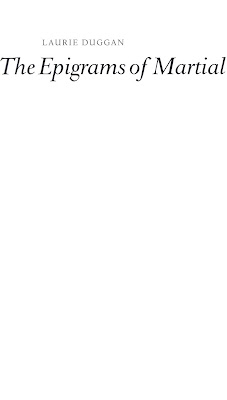 In 1986 after I had completed my long poem The Ash Range, Michael Heyward, then in the Latin department at Melbourne University, suggested I try my hand at translating the epigrams of Martial. He equipped me with the two-volume Loeb Classical Library edition (translated by Walter C.A. Ker) and left me to go on from there. The idea was that we would get a handful of pieces which Scripsi (the literary magazine Michael co-edited with Peter Craven) would publish, but something else happened along the way. I recognised in the Edwardian prose versions a tone that I could identify with, realising at the same time that if the poems were to be effectively re-worked in English this tone was the most important thing to retain. I realised that ‘faithful’ translations of satires, while possibly of use to historians, tended to lose the satirical element altogether. For satire to bite as it ought to its objects should be at least generically recognizable and as so much of Martial’s work is ad hominem a good dose of the particular was essential. In localising the poems I ran the risk of creating my own obscurities. Readers from elsewhere might not know that Kinsella’s was a classy Sydney nightclub, that Phar Lap was a famous racehorse, or that Tamworth is the Australian equivalent to Nashville: the home of mainstream country music. Satire has to live with the possibility of its eventual obscurity . . .
I’ve reflected since on what led me to take up Michael’s suggestion. I am not a Latinist and had, at that date, only translated some Early English work in the course of university study, plus a couple of loose versions of Rimbaud that appeared in my first book. The late seventies and most of the eighties were Australia’s time of ‘poetry wars’ and my own work had come under fire for formlessness, ignorance of tradition, you name it. As a result of this I had written some satires in regular verse forms in an attempt to outflank the critics. An American friend said of some of these pieces, ‘wow, you Aussies are so vicious’, hinting at another link: that Martial was himself from ‘the provinces’ (Bilbilis, in northern Spain) and had brought to Rome the kind of wit (crudity included) that sometimes only ‘provincials’ are capable of. It may be that the intensity those on the ‘outer’ bring to any tradition (modernism included) is what the postcolonial theorists are on about.
Posted by Laurie Duggan at 11:27 5 comments: 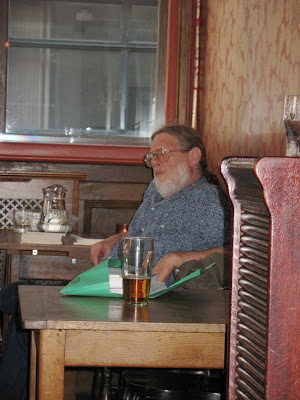 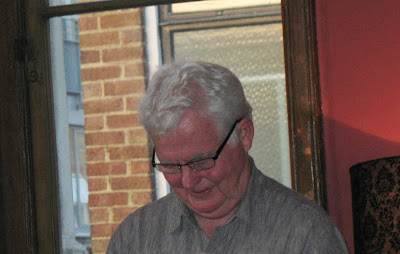 On Tuesday evening Martin Anderson and Damian Furniss read new work. Anderson was launching the second and middle volume (XXX-LIX) of his prose sequence The Hoplite Journals. These dense and intricate passages focus largely on South East and South Asia and well repay careful reading. The Crossing The Line reading the following night featured American visitors Mark Weiss (editor of a new and acclaimed anthology of Cuban poetry in translation) and Stephen Vincent whose haptics will be familiar to readers of the UK Poetry website (photos of these two above). At the second of these readings I faced a problem that must be common to photographers working from the back of an English audience: reflected light from the shaven heads of many of the punters.
Posted by Laurie Duggan at 16:50 No comments: