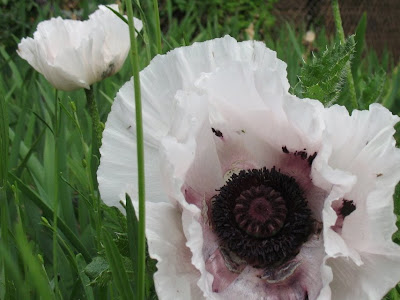 Posted by Laurie Duggan at 15:50 No comments:

The Australian poet πο famously avoided putting his own work and that of other poets in the magazines he had edited up on the web. His rationale for this was that the poems might be ‘stolen’, taken out of their contexts and misused by organisations with other agendas. I found it strange that a poet who saw his work as both political and public should opt out of a medium that would put the work out there. Now I’m not so sure he wasn’t right.

A few years ago a website run by John Tranter gave poets room to present a selection of their work together with bibliographies, critical pieces, photographs, whatever they deemed fit for the space. This site closed down about four years back. We were told that it would be resurrected with institutional support (the University of Sydney) and asked for our permission to include the existing material. I received a further email about this in January 2010 (I was addressed as ‘Laurence [Laurie] Gould’, conflating my name with that of another poet). John Tranter would be a salaried advisor to the project and it would be set up in conjunction with CAL (the Copyright Agency Ltd), a body dedicated to the fair distribution of fees for the work of authors and publishers. A large amount of public money ($600,000 I gather) was granted to the forthcoming Australian Poetry Library.

All seemed well. Until, at the beginning of this month (May) when quite by accident I was allowed a preview of the site. It would otherwise have remained inaccessible possibly up until May 25th when it was scheduled to be launched at a special event at Government House, NSW, as part of the Sydney Writers' Festival. I discovered that instead of the brief selection of my work which had appeared on the earlier site some 465 ‘poems’ had been uploaded. I say ‘poems’ because what I found on the site were often enough sections of poems that were never intended to be free-standing. I found poems by other poets from books I had shared with them attributed to me. I found some poems printed in different versions and some poems duplicated when they had appeared in different books. I found an uncountable number of layout errors and even spelling mistakes. Apparently the job of putting up the poems had been outsourced for financial reasons to a centre on the Subcontinent where the knowledge of html had taken precedence over any understanding of the presentation of poetry.

The new site differs fundamentally from the original one. Instead of being a user-friendly resource for the poets themselves as well as a general poetry audience APL seems to be directed largely towards secondary students. A google-style function dumbs down poetry by enabling readers to look up images, poems about love, ‘funny poems’. The categorisations are often crude (though a glossary of poetic terms is, I suppose, relatively useful). The page design is bordered by what could be lime-green corrugated iron, though it echoes fustier aspects of the 1951 ‘Festival of Britain’ aesthetic where stylised curtains open onto the ‘stage’ of poetry (if you think I exaggerate, look here). Although the site presents itself as an educational resource I fear that it will do little for any genuine appreciation of poetry. A friend once observed that the poems of Bruce Dawe were popular in Australian schools because English teachers are not often interested in poetry themselves and Dawe’s work enables them to use the poems to talk about ‘issues’. The functions on the APL site pander to this tendency suggesting that poems are mere containers of information that could easily enough be accessed anywhere else.

I promptly wrote to those responsible at the University of Sydney, to CAL, to the Australian Society of Authors and to several of the other poets represented on the site. The other poets all found similar mistakes (and in some instances misattributions). None of them had been informed about what pieces of their own work were to go up on the new site. Their publishers hadn’t been asked either. I suggested that there had been serious breaches of copyright and a serious breach of authors’ moral rights.

At the time of writing the APL site will have become public. I have had my selection reduced to 26 poems though there are still errors. Others have not been so fortunate. It has been an experience I would rather have avoided. It is certainly an experience that could have been avoided if only APL had entered into a dialogue with those whom it claims to represent. Indeed it seems incomprehensible that a body like the CAL should have associated itself with a project that has run roughshod over the wishes of authors and their print publishers (Brandl & Schlesinger had just reprinted John Forbes’ Collected Poems without having been told that the entire book would be up on the website). It is a state of affairs almost beyond belief. 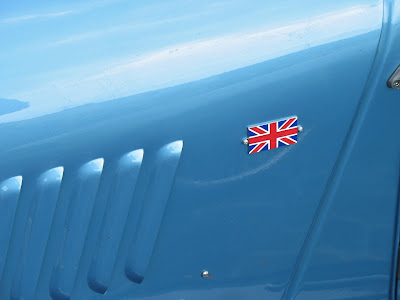 Posted by Laurie Duggan at 09:26 No comments:

another empty shopfront in Margate 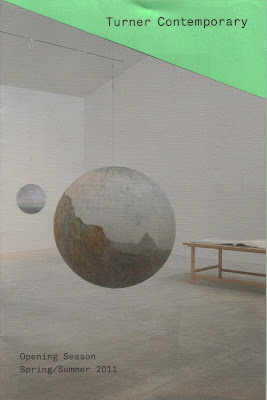 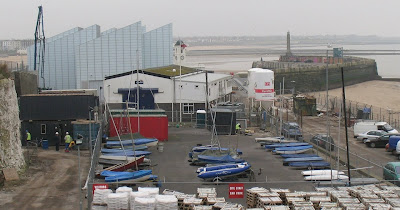 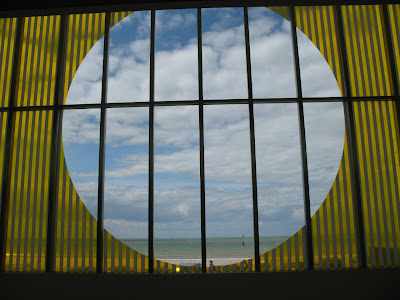 and it’s called the Turner Gallery. I had eagerly anticipated its opening and had liked what I saw of the building, its plain modernism refreshing after all of the ‘signature’ efforts of recent years. After visiting the gallery my first thought was ‘I’ve driven this far to see this?’ Certainly art education seems well served, yet the galleries themselves resemble children’s playrooms run by sadists (the children aren’t allowed to touch anything). It was like being inside a bouncy castle that didn’t bounce. Now don’t get me wrong, I like minimalism. But so much contemporary art seems instead to be primarily conceptual work that then goes on to illustrate itself monotonously. I could say the same thing about some recent poetry.
Posted by Laurie Duggan at 10:57 No comments: 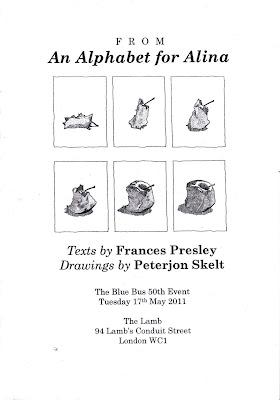 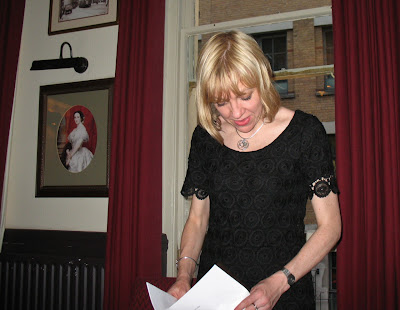 The fiftieth Blue Bus reading last night featured Zoë Skoulding (above), down from Anglesea, and Frances Presley. I should really have photographed Peter Philpott’s three more than excellent cakes produced for the occasion. This is not, however, to detract from the reading itself. Both Skoulding and Presley appear in Harriett Tarlo’s anthology of radical landscape poetry, The Ground Aslant (indeed the title comes from one of Skoulding’s poems) and the work of both poets has a firm fix on language and place. Presley’s alphabet poems, some of which appear in the booklet above with drawings by Peterjon Skelt, balance the ancient and the modern unselfconsciously and with a deal of humour and grace. These works feel like they belong somewhere.
Posted by Laurie Duggan at 12:10 No comments: 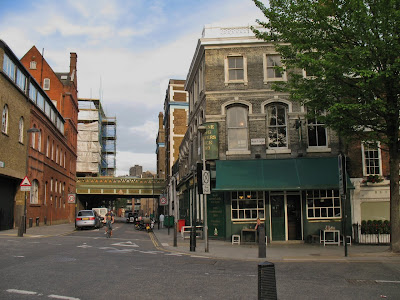 Crossing the Line has had an uncertain few months. Pubs would agree to hold readings then decide that fine dining was the better option. The Shoreditch pub I read in last year seemed ideal abut, alas, the kitchen won out. Now there’s a hopeful candidate, The Apple Tree, near the Royal Mail Sorting Office and in walking distance of St Pancras. The room is L-shaped, offering intriguing possibilities, but it seemed to work well enough for the Reality Street launch on Wednesday. Carol Watts offered Occasions, her second book from this publisher, a series of equal-length poems written over the course of a year, while James Davies, down from Manchester, read from Plants, a diverse and amusing collection (the ‘plants’ being poems substituted for poems). 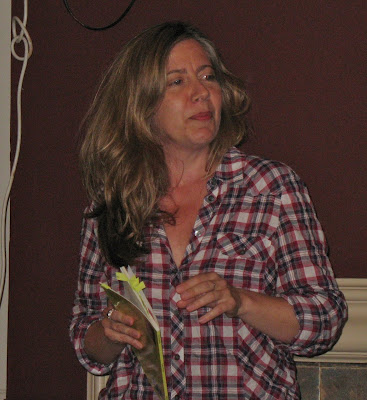 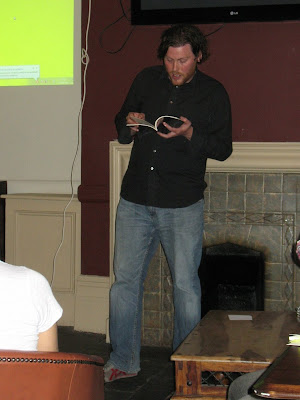 Posted by Laurie Duggan at 11:58 No comments: 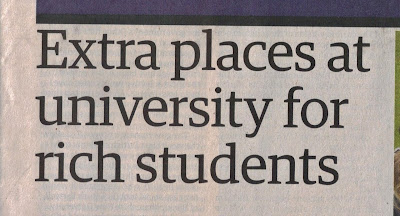 The Conservative Government have spun this one as 'increasing social mobility'.
Posted by Laurie Duggan at 07:50 No comments:

For all who may be interested there's a poem by Basil King with an introduction to his recent work by me in the current issue of the terrific magazine Big Bridge.
Posted by Laurie Duggan at 17:26 No comments: 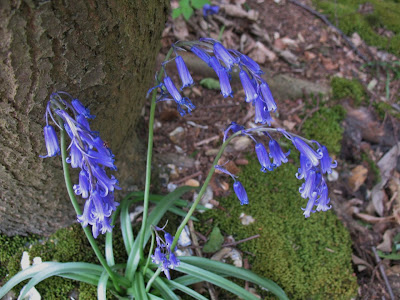 Posted by Laurie Duggan at 19:24 No comments: 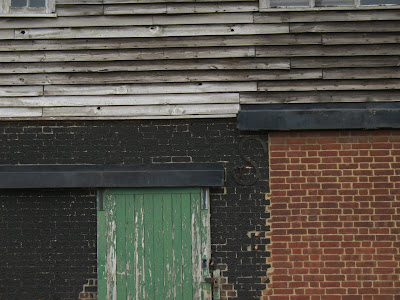 Posted by Laurie Duggan at 13:58 No comments: 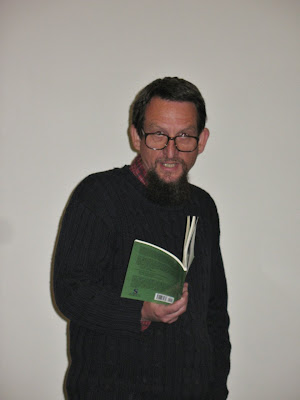 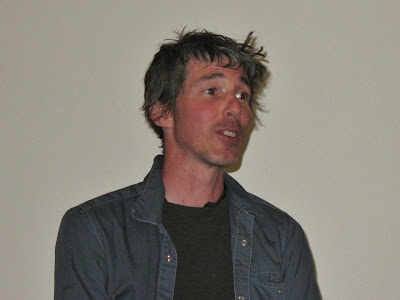 Tuesday’s Shearsman reading featured Aidan Semmens and Cralan Kelder: very different performers but both writers of wit and concision. Semmens had stopped writing poems for a considerable period. His return can only be welcomed and A Stone Dog is a fine book. Kelder played with his transatlantic background to the extent of having another reader ‘Englishing’ his work (from Give Some Word). A sad note was the appearance of Anne Blonstein’s second Shearsman volume only shortly after her way too early death. 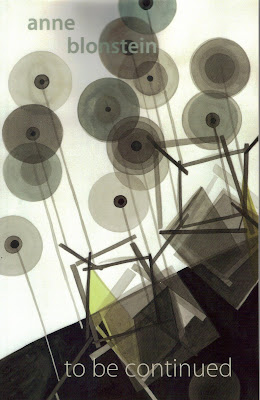 Posted by Laurie Duggan at 13:48 No comments: