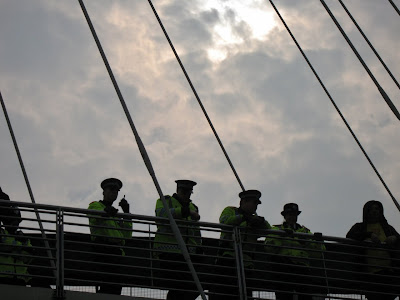 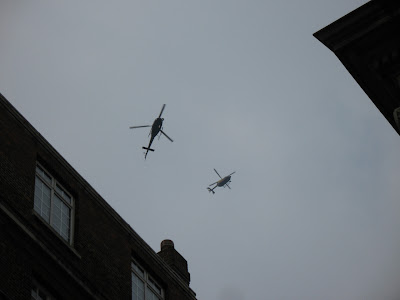 And, no surprise, there is talk about increased police surveillance and 'stop and search' powers. Who will they stop and search? The 'usual suspects'? People with badges? People with unusual haircuts? People of colour?
Posted by Laurie Duggan at 19:51 No comments: 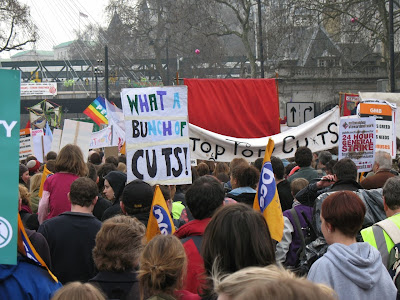 The press reported yesterday’s march through the West End of London as a quarter of a million strong. It would be safe to assume that the event (held in opposition to Government cuts) was even bigger than that. We arrived at the starting point on the Embankment at around 1.30, the time at which the events staged at Hyde Park, the terminus, were to begin. We were close to the tail end of the march. People with a better grasp of applied maths than I have might consider a dense, street wide crowd, stretching for the three miles between these two points and with a considerable number already gathered at the destination. 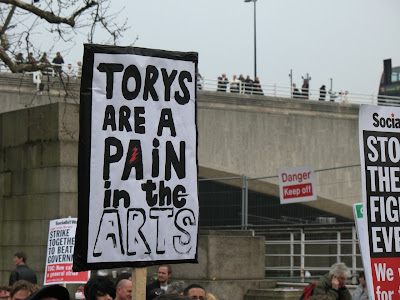 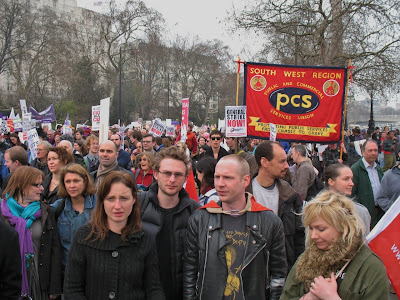 The press have also, as is to be expected, concentrated on events happening alongside the march and afterwards: the activity by UK Uncut and other groups along Oxford Street, at Fortnum & Masons in Piccadilly and later in Trafalgar Square. Whatever your attitude to the damage caused in these places what is certain is that its effects won’t even be visible by Monday. The damage the present government is inflicting on most of the people in this country will, alas, be around for a lot longer. 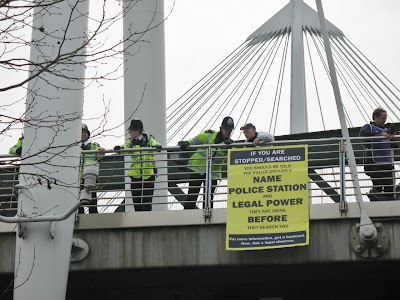 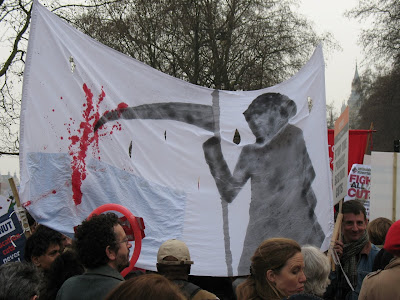 Various economists have argued that the decimation of the public sector is necessary. What’s clear is that such cuts fall with a breathtaking weight on those parts of the public who can least bear it. Consider that sales of apartments at No 1 Hyde Park are booming (they go for some £60 million apiece) while the aged, the infirm, the unemployed, the students, and those on low incomes are being punished for the often foolish and mostly immoral activities of bankers. The Conservatives and their unmentionable coalition partners got some advertising executive to coin a term ‘the big society’ to give a warm glow to their acts of vandalism. This pathetic attempt to make ‘small government’ sound sexy has largely failed to conceal its baser motives. 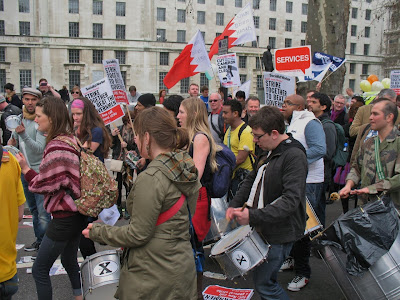 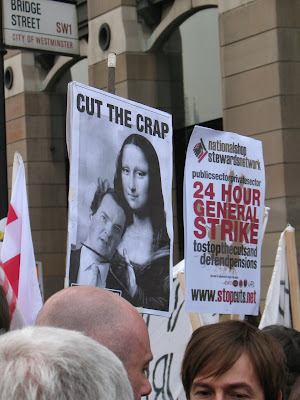 All of these unequal cuts proceed from a philosophy which hails ‘freedom’ while severely limiting the possibility that most people will benefit from it. Yes, the Tories are an elected government, but they are beholden to unelected bodies. I would like to know a lot more about organizations such as Moody’s and Standard & Poor’s who ‘grade’ us and punish those governments who don’t toe their particular line (which is, no surprise, neoconservative economics). While the UK Uncut people stood in the gaze of hundreds of CCTV cameras and numerous police videos, the members of these organizations are invisible in their grey suits. 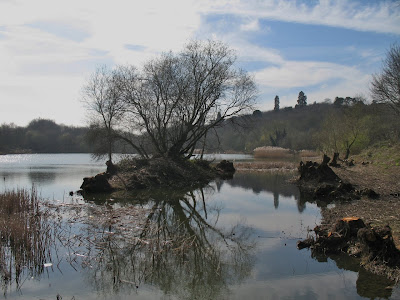 Posted by Laurie Duggan at 11:35 No comments:

Now up on the web: Issue 8 of foam:e mag, edited by moi. I worked on the principle that it would deal, one way or another, with Australasian poetry (and this included expatriates and constant visitors). I'm more than happy with the result. See for yourselves.
Posted by Laurie Duggan at 20:15 2 comments: 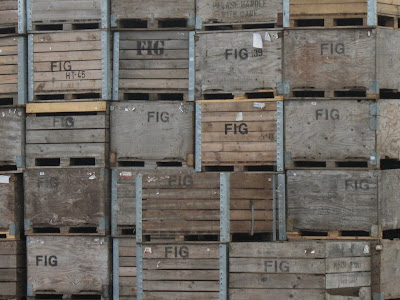 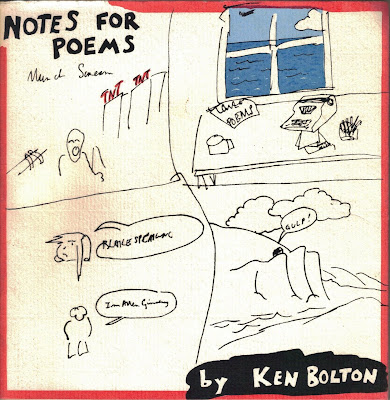 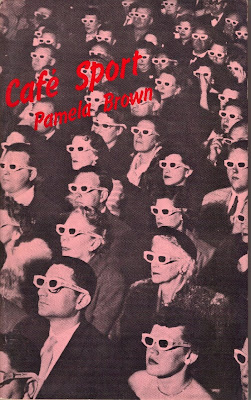 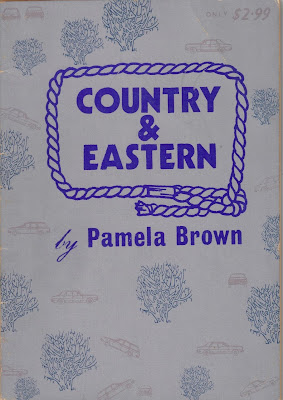 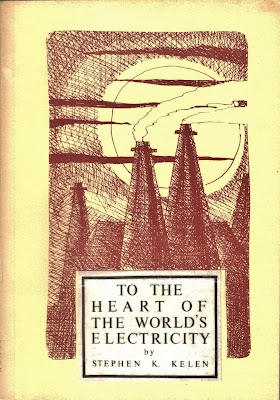 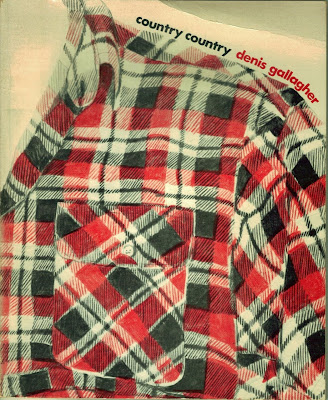 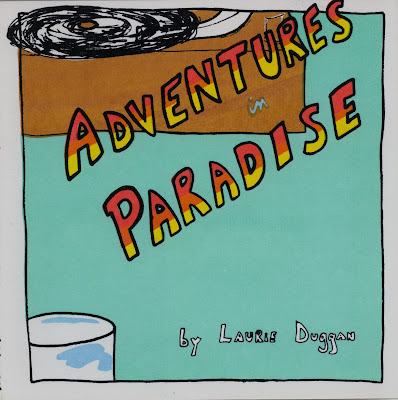 In a month’s time the Wollongong City Gallery exhibition Coalcliff Days will open. Comprising of art work, book designs, texts and poetry readings it represents the work of a number of writers and artists over the period 1979-1983 who passed through the house Ken Bolton and Sal Brereton (and later Alan Jefferies) lived in. There will be two readings held in connection with the show and I’ll be participating in both. For details check the link above together with the blog. Meanwhile here are a few book covers from the period: Notes for Poems by Ken Bolton (A Shocking Looking Book, 1982); Café Sport (Seacruise Books, 1979) and Country & Eastern (Never Never Books, 1980) by Pam Brown; To the Heart of the World’s Electricity by Steve Kelen (Senor Press, 1980); Country Country by Denis Gallagher (Island Press, 1979); and my own Adventures in Paradise (Magic Sam, 1982). Ken designed my book as well as his own (in the lower right frame of which the Coalcliff house appears perched on the edge of the cliff). Micky Allan did the cover for Pam’s Country & Eastern.