The Ambassador From Venus 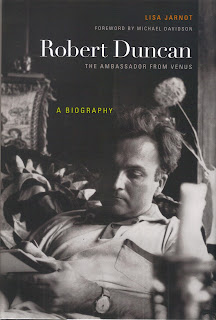 This must be Robert Duncan’s year. A volume of interviews has come out with North Atlantic Books and the first volume of the Collected Poems is to appear before the end of the year. Meanwhile I’ve just finished reading Lisa Jarnot’s biography (University of California). It’s a very good book, up there with the Killian/Ellingham biography of Jack Spicer, though not entirely without fault. There’s much detail on Duncan’s Bay Area heritage while his connection with Black Mountain College is less clearly discussed. Certainly his relationships with Robert Creeley and Charles Olson are detailed but you sense that the College itself isn’t deemed so important. Duncan’s poetic was mostly formed by the time Olson took over at Black Mountain (and his relationship with the older poet was not always an easy one). After the publication of Donald Allen’s The New American Poetry Duncan’s life became increasingly more hectic as he made appearances and taught for longer periods at numerous American institutions. These travels and his longer ones to Europe and Australia are recorded here at times somewhat breathlessly though there are still omissions here and there. Duncan’s friendships were varied and crossed boundaries. He got along very well with Elizabeth Bishop, for instance, though they didn’t dwell on each other’s writings or poetics. There is some detail on Duncan’s visit to Australia in the mid-seventies though it mostly focusses on the Sydney connection (Robert Adamson and Chris Edwards in particular). I met him briefly myself in Melbourne at Bernie O’Regan’s house with a group of poets including Kris Hemensley and Walter Billeter. We all read from our work, Duncan characteristically conducting his own reading with waving arm. He was most taken with the work of Walter Billeter, a writer of Swiss/German background living in Australia and working as a poet and translator (Breath Crystal, his version of Celan, published by Robert Kenny’s Rigmarole Press, is very good). Not long after this Billeter stopped writing and disappeared from the scene.

I love the 'waving arm'.
Any mention of Jess?
Did he visit Australia too?

Thanks Laurie. I missed Robert Duncan's visit to Australia way back whenever. There's a talk advertised at UTS in Sydney in late October, with Lisa Jarnot's title - 'The Ambassador of Venus'- about the Roberts Creeley & Duncan apparently, by another Robert - Adamson.

Hi Laurie... regarding Robert Duncan's Melbourne visit in 1976 : the meeting you describe actually was at the Hemensleys house in Westgarth. There's a photo up in the Collected Works Bookshop taken by Bernie O'Regan wch memorializes the gathering. In the photo you can see Walter & Poppy Billeter, the Hemensleys, an almost 5 year old Timothy H, Robert Kenny, Jude Telford, and your good self. Not in the photo are John Anderson & Ned Johnson who came by after lunch as I recall. We all talked & read our poems for hours, Robert D living up to his reputation as an irrepressible raconteur, demonstrating his commitment to what he called "essential gossip"! Walter recorded a lot of this on reel to reel tape. God knows what happened to it. I'd dreamt of transcribing & publishing it some day. I have a feeling that Robert K chased it up at some point, however if it was in his possession at the time of the terrible Black Saturday fires it wld have been destroyed along with everything else he owned. Duncan liked the European accent we provided (and i dont merely mean Walter's Swiss-Deutch sing-song) : some of our Melbourne discussion ca 73-78 orbited Celan, Jabes, Mandelshtam. Of course there was Olson, Spicer, New Yorkers, Beats, the Bolinas poets and the English poets i'd brought back to Melbourne 72/3 (John Riley, Peter Riley, John Hall,Tim Longville, Michael Chamberlain, Michael Haslam, David Chaloner, & others). These crosscurrents reflected in our mags of the time (The Ear, Etymspheres, Rigmarole)... Allow me to quote you Robert Duncan's greeting when i answered the ring at the front door : "I come not as an envoy from imperial San Francisco but as a subscriber to The Ear in a Wheatfield!"