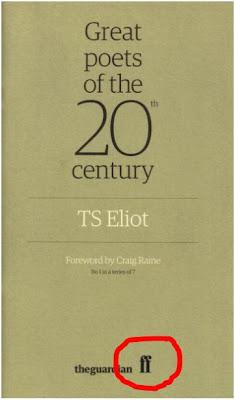 I don't suppose many people talk about hegemony these days. But here in the UK, right before my eyes, is a perfect example of what Gramsci meant in his use of this term: the construction of a set of beliefs held by a particular interest group as a generally accepted norm. Last Saturday the Guardian announced that seven booklets under the moniker 'Great Poets of the 20th Century' would appear through the week. Many people have commented on this in chatrooms and elsewhere. I sent an email to the paper noting that these poets all wrote in the English language, that they had all spent a considerable part of their lives in the UK, and thirdly and perhaps more significantly, they were all published by Faber and Faber (the initial ads obscured this). I noted also that the photograph of a Writer's Room in that Saturday's Review section featured Simon Armitage another Faber author's workspace. Perhaps brashly I added 'don't worry Simon old son, you'll be in next year's edition'. I wasn't surprised when my letter didn't appear in the paper. I was surprised however at the blatancy of the exercise when the first booklet appeared emblazoned with the Faber logo. This whole thing is so clearly an exercise in marketing disguised as an educational initiative. I remembered the story told some years back by John Matthias, an American poet who had spent some time teaching in England and who had edited Faber's Introducing David Jones volume. He had revisited the company's offices in the mid-eighties and had observed the new management in action. Along with the new ff logo (as circled above), a brochure appeared with photographs of the twelve living Faber poets entitled 'The best of poetry today'. Several of these poets were flown around the country in helicopters in a sort of poetry blitzkreig. 'Dump bins' in front of shops were crammed with Faber titles. All this had become possible through the success of the musical 'Cats' and the subsequent money accumulated through the Eliot franchise. But what happened to poetry amid all of this? Craig Raine and the 'Martians' were the self-proclaimed future of English writing at the time, though Matthias elsewhere notes that their work is 'the thinnest and most foppish poetry in England since the Sitwells' (note here that Raine introduces Eliot in the Guardian's series and uses his brief space for a gratuitous swipe at JH Prynne). Faber have undoubtedly published 'great' poetry in their time, though it could, amusingly, be argued that each generation of Faber poets is worse than the previous one. The Guardian's editors ought to be ashamed of themselves.
Posted by Laurie Duggan at 10:19