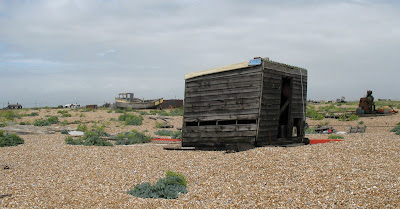 Derek Jarman chose Dungeness as a place to establish his garden. It is a singular environment. Everything you come across here (including the decommissioned nuclear power plant) seems to have been abandoned. The garden of the house neighbouring Jarman’s is composed mainly of flotsam, though various domestic items, like clothes-pegs have been used as well. Turning from this landscape of stones, ropes, winches and decaying sheds and vessels to look at the work artists like Paul Nash, Edward Wadsworth and others were doing in the 1930s, I sense that this is how Surrealism arrived in England: it floated across the Channel. 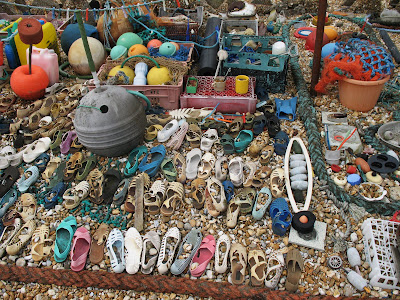 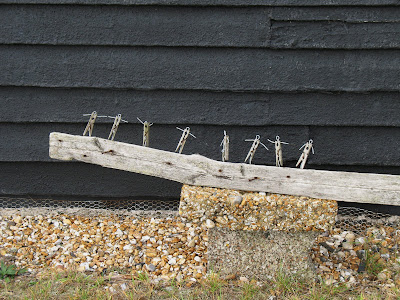 Surrealism reached Australia in a different manner entirely (though an early painting by Donald Friend shares similarities with the English works, making use of the marine landscape near Robe, South Australia). It makes sense that an art as aware of publicity as Surrealism should arrive at a distant place through the media of publicity. By the time it made an impact in the Australian cities it had already been co-opted by the advertising and fashion worlds (the earliest surreal ‘installations’ were made by window-dressers, and Sydney’s first major exhibition of modernist art including Surrealism took place in a department store). It is worth remembering that a good deal of anti-modernist rhetoric in Australia in the thirties and forties (particularly that of the left) was based on a belief that modernism itself was high fashion and that it was typically the pursuit of middle-class women with time and money.
It’s also true that when a culture is exported strange things can happen in transit. The Australian Surrealists often took Salvador Dalí as their departure point with the result that their work seems at times to be programmatically Freudian. The desire to do it right, even in the realm of the classics could wrap things in a surreal mantle. This photograph (taken in the early 1920s) of my father and another boy dressed for a Shakespeare play at a small school in country Victoria takes on the strangeness of a photomontage.

The connection you sketch between surrealism and coastal landscapes is fascinating. The Dali / Gleeson brand is full of the shapes of marine lifeforms. 20 years ago, walking along the coast below the Great Ocean Road, between Lorne and Apollo Bay one could see both rusted bits of cars that had crashed off the road and old beams of driftwood presumably from 19th-century shipwrecks, and of course the backdrop of the Otways landscape.

The photo of your father captures wonderfully something of the intrinsic surreality of a transplanted culture. It looks like the boys are standing in front of a McCubbin (or maybe a Fred Williams). Another Porter reference springs to mind, an early poem 'Reading MND in Form 4B'.